Editor’s note: Yang Yuguang is vice-chairman of the Space Transport Committee of the International Astronautical Federation. The article reflects the opinions of the author and not necessarily the views of CGTN.

The three Shenzhou-13 astronauts completed their six-month space mission and returned safely to Earth on April 16.

Crew transport, rendezvous/docking, and extravehicular activity are referred to as the three fundamental technologies of manned spaceflight. For any space-capable nation that wants to have a space station, or have a manned mission to the Moon, they must master these three technologies. During the intensive space race between the former Soviet Union and the United States in the middle of the last century, they mastered these technologies through the Vostok, Voskhod, Soyuz space programs and the Mercury, Gemini, Apollo programs respectively.

Coincidentally, Wang Yaping, China’s second female astronaut and first female space teacher, is a crew member of the Shenzhou-10 and Shenzhou-13 missions. With the safe return of the Shenzhou-13 reentry capsule, she and her crew members once again made history. The Shenzhou-13 spacecraft achieved both rapid rendezvous/docking and rapid return. This shows that China has made new progress in crew transport technology.

About six hours after launching from the Jiuquan Satellite Launch Center, the Shenzhou-13 spacecraft successfully encountered the Tiangong space station and docked at the Earth-facing docking port. It is not easy. To connect spacecraft together, the basic requirement is that the second spacecraft must enter the same orbital plane as the first. Considering that the Earth is constantly spinning, we usually have no choice but to launch the second spacecraft while the launch site is facing the orbital plane of the first spacecraft.

However, this is the right time for the launch, but when the second spacecraft enters orbit, its position is usually quite different from the first. To solve this problem, we choose a relatively low orbit because it would spin faster and thus hunt the former. With a two-day transfer period, like previous missions, we’ll have plenty of chance to deal with all sorts of issues. But with the fast rendezvous and docking, it raised a much higher reliability requirement for the Shenzhou spacecraft. In addition, maneuvers in orbit must be carefully planned and conducted. 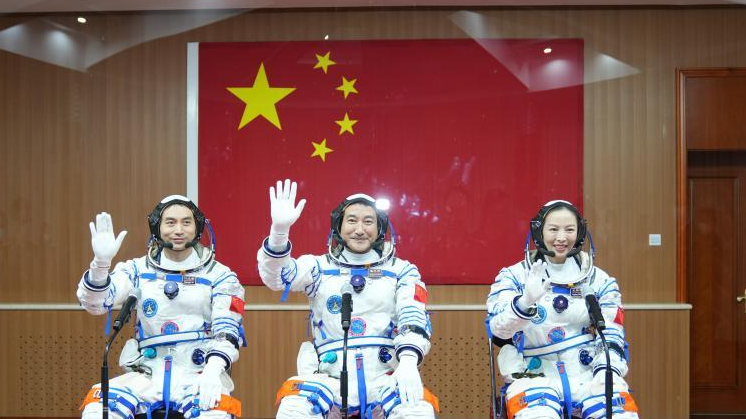 A departure ceremony for three Chinese astronauts of the Shenzhou-13 crewed space mission is held at the Satellite Launch Center in Jiuquan, China, Oct. 15, 2021. /Xinhua

A departure ceremony for three Chinese astronauts of the Shenzhou-13 crewed space mission is held at the Satellite Launch Center in Jiuquan, China, Oct. 15, 2021. /Xinhua

The rendezvous and docking of the Shenzhou-13 spacecraft with the Tiangong space station was excellent, as it shows that China has very practically mastered the technology of rapid rendezvous and docking. This made the crew members very comfortable as they were only around six hours in the cramped volume. Another problem we should consider is “space motion sickness”, which is caused by the influence of zero-G on the human cardiovascular system and neural system. Typically, illness occurs six hours after orbiting, and astronauts feel better within two days. With the fast rendezvous and docking, the astronauts will keep a very good status before entering the station. It also brings another advantage, if something goes wrong with the autonomous docking system, the Shenzhou-13 Commander can switch to manual docking mode. Because they are still in very good condition, it can also guarantee the success of manual operations.

Shenzhou-13 has not only accomplished rapid rendezvous and docking, it is also China’s first spacecraft that has achieved radial-direction docking. Mastering this technology is very critical for the construction and operation of the Chinese space station. Because the Tiangong space station only has one front docking port and one rear docking port. If the two docking ports are occupied by other spacecraft, like this time, the two docking ports were occupied by the Tianzhou-2 and Tianzhou-3 cargo spacecraft. Thus, Shenzhou-13 has no choice but to dock at the Earth-facing docking port. Approaching the station from below means that the two spacecraft are in different orbits, compared to docking from the front or the back, theoretically speaking the relative position is not stable, which brings more challenge to operation.

When the Shenzhou-13 spacecraft undocked from the Tiangong space station, it only took a few hours to return to the Dongfeng landing zone. This fast return technology is also a remarkable breakthrough in return technology.

Similar to rendezvous and docking, the Shenzhou spacecraft must perform the deorbit insertion when the landing zone is rotated with the Earth toward the Shenzhou orbital plane. For each day, there is only one chance for this operation. Before that, the Shenzhou spacecraft must have left the Tiangong space station at a safe distance, and the orbital module must be separated from the re-entry capsule. Unlike previous missions, the Shenzhou-13 spacecraft carried out all kinds of complex operations in just a few hours and successfully deorbited. And then the propulsion module is separated. Like fast rendezvous and docking, fast return also ensures that Shenzhou-13’s crew only stays in a reduced volume for a very short time, much more comfortable than previous missions.

With the success of the Shenzhou-13 mission, China is now more convenient in rendezvous/fast docking, radial direction docking and fast return, which shows China’s remarkable progress in crew transport.

Paying attention to the access gap: tackling both the digital divide and transport to improve outcomes