“I am in the last quarter of my life, a very spiritual age. That’s why I wanted white, that feeling of peace. But because of the energy I have, and my fiancé is the same, I had to have the splash of color. — Mikki Williams

MIKKI WILLIAMS describes itself as “a sequin in a sea of ​​khaki”, and its interior decoration reflects this attitude.

With white as the backdrop, each piece has a pop of color that stands out the same way Ms. Williams does in any crowd. “I am in the last quarter of my life, a very spiritual age. That’s why I wanted white, that feeling of peace,” she says. “But because of the energy I have, and my fiancé is the same, I had to have the splash of color.”

Born in New York, Ms. Williams lived in Connecticut and Chicago before moving to Bonita Springs nine years ago. She calls herself a “serial entrepreneur” who has worked as a professional dancer, physical education teacher, gourmet caterer, health club owner and a dozen other professions. Her current focus is on keynote speeches and executive coaching.

In 2018, Ms Williams began dating local tennis instructor Curly Davis. They got engaged in 2019 and built a house in Esplanade in 2020. 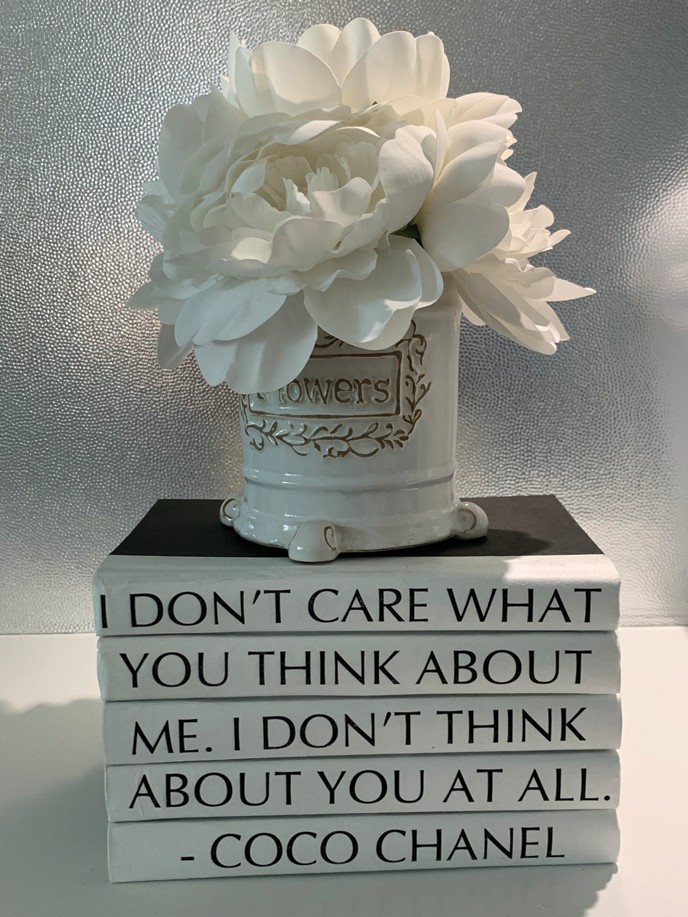 This saying, left, reflects Ms Williams’ approach to life. She says the chairs in the dining room, on the right, are her favorite part of the house.

She had a vision for the living spaces but was looking for an interior designer to execute it. To get ideas, she attended a luxury home show at the Ritz-Carlton. A stall in the last room was so crowded that she couldn’t get in. But she saw “incredible” chairs with gold fringe that she loved, so she picked up the designer’s brochure.

Ironically, a friend who also attended the show asked if she had seen this person’s booth. She told Ms Williams the designer was perfect for her because they are both ‘flamboyant and outrageous’.

Fates aligned when Ms Williams went to a new hairdresser whose beautiful salon was filled with sparkles. She jokingly asked the stylist if he could be her decorator. He said no, but that his partner could.

“He’s as flashy as me,” Ms Williams says. “He totally got what I wanted and was able to develop it. He’s like the male version of me. 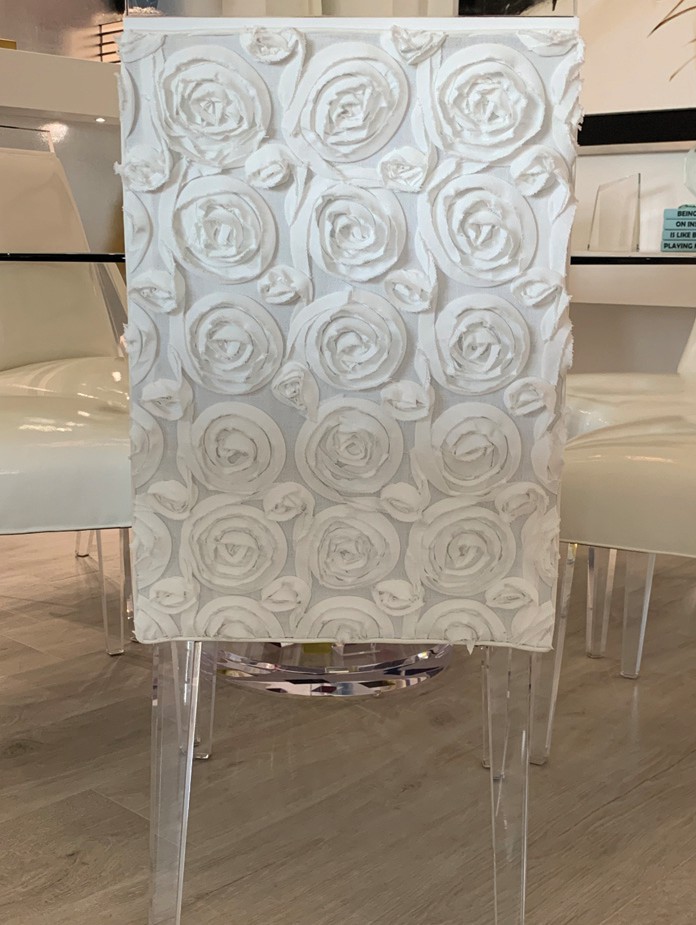 Ms. Williams gave Mr. Emanuel these adjectives to describe his vision: glamorous, sexy, unique, outrageous, different, eccentric, lavish and lush. She also told him that she likes art deco and contemporary furniture. This translated into things like a velvet sofa in the living room and plastic conservatory furniture that lights up in different colors at night, which Ms Williams had seen in a magazine.

“A lot of people go to designers and have no idea what they want,” she says. “I’ve cut and cut pictures of furniture and magazine recipes all my life.”

She requested a Lucite canopy bed for the master bedroom; Mr. Emanuel added a white feather fan, two yellow flower-shaped chairs for a splash of color, a decorative palm tree made of feathers and shiny bedspreads including a table runner he had made in quilted silver lamé studded with crystals. 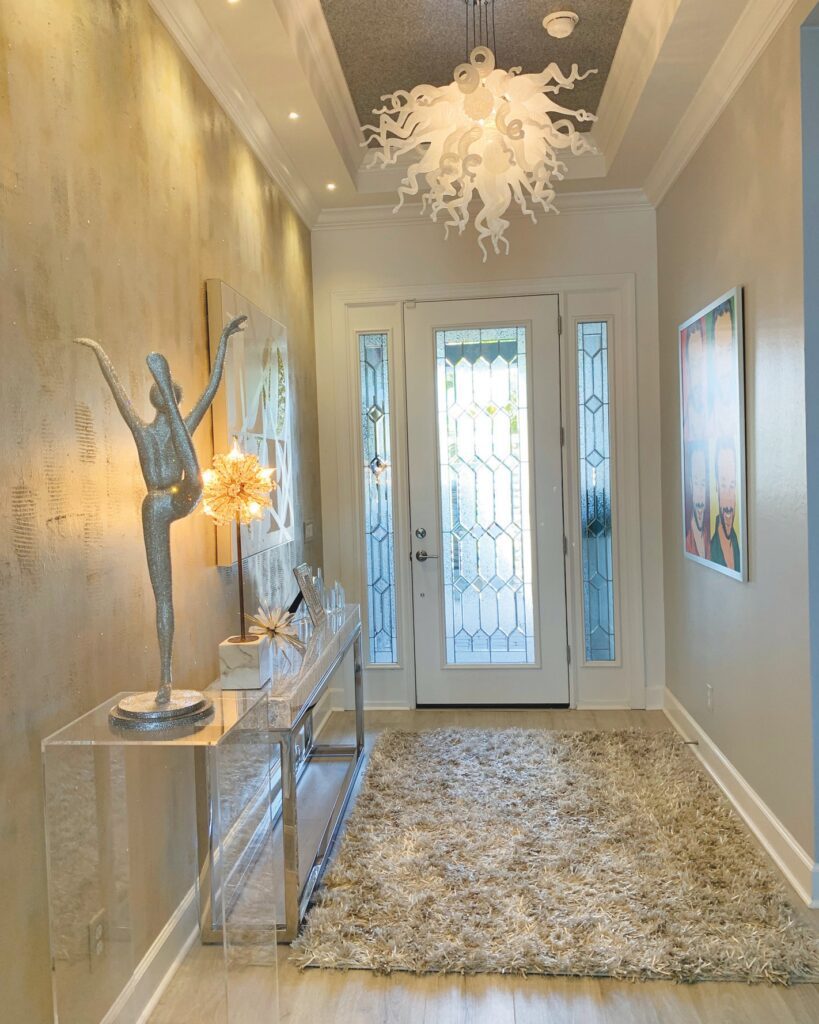 Chihuly-inspired light fixtures provide a focal point in the sophisticated hall above and in the white kitchen to the right.

“There’s not a place in the house that doesn’t have a sparkle or a glitz,” says Ms. Williams. “His attention to detail is fantastic.”

This includes rhinestones in the bedroom curtains and in the lobby wallpaper, where the sparkles were added by hand using a toothpick in a process that took several hours.

Ms Williams says her favorite thing about the house are the dining chairs Mr Emanuel found. They feature white silk flowers on a white background. “He showed me this fabric and I immediately fell in love with it. The chairs were made for me,” she says.

The chairs are paired with a glass table with a Lucite base which Ms. Williams says refracts a prism of color.

Ms. Williams and Mr. Emanuel opted for a Chihuly-inspired kitchen, where stained art glass makes a dramatic statement on the White Island. The voice-activated Bixby on the fridge acts as an additional piece of art in the room, but can also stream TV. 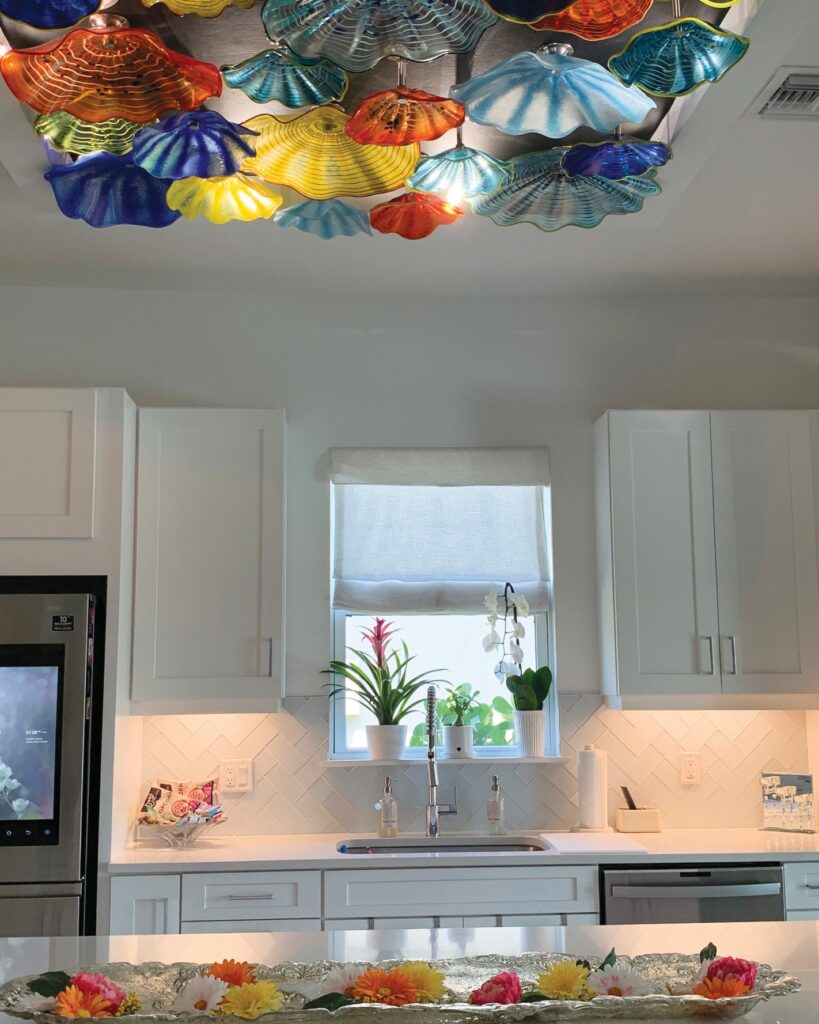 When she’s at the store, she can contact her fridge to find out what’s inside and even get a recipe using those ingredients. “This fridge does everything but scratch your back,” she laughs.

Although the chairs in the dining room are her favorite, her closet probably inspires the most envy of guests.

“I’ve always wanted to turn a room into a closet,” she says of a lifelong dream. As she and Mr. Davis were looking for a house to buy, it was on her mind. When she realized she could cut through the master bedroom closet into the adjoining guest bedroom, she sold it on this model. Everything in the closet has been custom-made, including a rotating carousel that displays 200 pairs of shoes and narrow, horizontal drawers that hold clothes and accessories. Hanging clothes are color coded. “It’s the first time I can see everything I own,” she says.

They took care to keep the closet in the bedroom, which serves as a make-up area, and the bathroom, so that the next owner could still use this space as a guest bedroom.

Mr. Davis has given his fiancée free rein with interior decorating and loves it, with two exceptions.

“He thinks the guest room chair looks like Alice in Wonderland,” Ms Williams jokes of the oversized purple chair, adding, “Everyone who walks into the house takes a picture of themselves in this chair. “

She says Mr. Davis also doesn’t have much enthusiasm for a 3D wall of hands dripping with diamonds that she created.

But all of these fun elements are part of what Ms Williams likes to discuss when her family and friends come to visit.

When the pandemic started, she threw a “Monday Mingler” down their driveway for neighbors on her street that continues today, occasionally moving indoors. They throw big parties to celebrate birthdays and often invite Mr. Davis’ customers over for a drink.

The large kitchen and open floor plan, along with the spacious sunroom with a full kitchen and ample seating, were intentional for all the couple’s entertaining. All outdoor furniture is washable, but since the house decor is white, they don’t serve red wine.

Parties even have an added element of fun. A statue of a dancer, a reminder of Ms. Williams’ early career, sits in the lobby. Mr. Emanuel found it and had it covered in Swarovski crystals.

“When we throw a party, people have to guess the number of crystals and we have a prize,” says Ms Williams.

Although she shared the response to this story, we can’t spoil the surprise. ¦

The Chamber voted to allow staff members to unionize. Here’s how it will work.

In a huge victory for congressional organizers, the House of Representatives on Tuesday passed a resolution that guarantees its employees protection from retaliation if they join a union. This vote marks a significant shift on the Hill, where employees have had little recourse to fight poor working conditions, low wages and long hours. It is […]

A top federal drug official says “the train has left the station” on psychedelics. National Institute on Drug Abuse (NIDA) director Nora Volkow said people will continue to use substances like psilocybin – especially as the reform movement grows and increased attention is being paid to potential therapeutic benefits – and so researchers and regulators […]