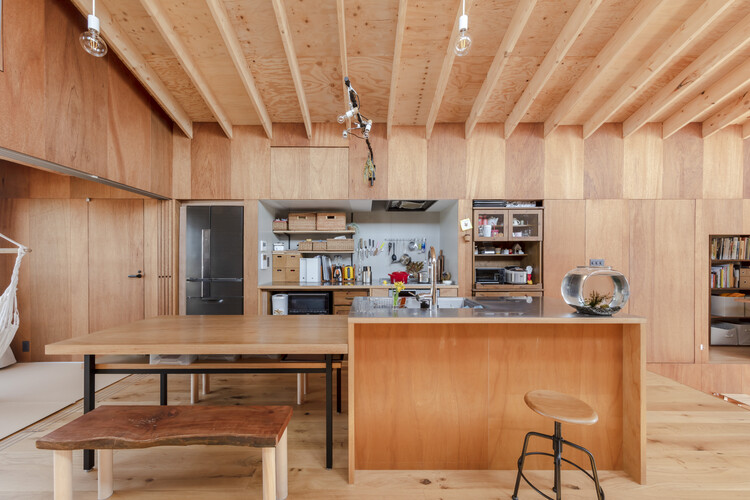 Text description provided by the architects. The site is located on the corner of a hillside residential complex in the city of Hiroshima and is a subdivision of a former residential land that has been sold in two parts, north and south. It used to be called Tsukimiyama. It is said that the warlord Taira no Kiyomori used to organize moon watching parties there. The mountains of the past are no longer visible, but Kaita Bay and the mountains in the distance remain unchanged. I wanted to create a house that would be like a piece of land, where I could feel the environment at hand and yet develop it according to my own lifestyle.

The client is a family of four, a couple and two children. The site is long and narrow from east to west, and the buildings on the north and south sides are close to the edge. Due to the condition of the site, the north and south sides had to be closed, and there were many restrictions on the position of the openings due to the road on the west side and neighboring houses on the east side. It was too tight for this active family who love the outdoors and mountaineering.

A grand staircase elevates the living space to the second floor, and windows on the high south side and on the east and west sides create an open space. The second floor has an ocean view to the east and a floating deck on the west side of the road. The grand staircase is one room wide and has a stepped landing on the side, making it more than just a passage, but a living space. When you sit down, your gaze is directed to the sea through the small garden.

On the first floor there is a WC, a hallway and a room at the bottom of the stairs. As you enter through the front door, a long hallway leads to the end of the building, and in the room directly under the grand staircase, light leaks between the steps. Turning around at the end of the hallway, we reach a brightly lit area with a stairwell leading to the second floor.

From the slightly dark hallway, we exit to the bright and open staircase and go up to the living room on the second floor with a beautiful view. Along the way there is a bearing that will change as the children grow older. We greet each other from the aerial terrace on the street. The sequence around these places is like the feeling of walking in the mountains. The living room on the second floor, connected by a large staircase, is like a topography. Just as Taira no Kiyomori crossed the mountains to find a place to watch the moon, I hope that each member of the family will find a favorite place to live and develop the house.

Will UK house prices ever collapse? We ask the expert | House prices

The United Kingdom, and London in particular, is home to the most expensive property market in Europe after Monaco. For a generation of young people who have seen homeownership become unattainable, the idea of â€‹â€‹a significant drop in prices is inconceivable. But in a time of inconceivable – a global pandemic, Christmas turkey shortages, Kanye […]

NCP’s lesson to Congress – get your house in order

Mumbai, Jan 23 (IANS): Amid row over alliance in Goa between Maharashtra MVA partners – NCP, Congress and Shiv Sena, NCP leader Majeed Memon has lessons for Congress and asked them to put some order in their house. Memon tweeted: “Congress must get its house in order soon by declaring a regular leader and reconciling […]

STANLEY, Va. (WHSV) – Stanley Fire Chief Terry A. Pettit reported that the Stanley Fire Department responded to a structure fire involving a home at 3:41 a.m. Thursday morning located at 287 Little Roundhead Drive. The house was in a wooded area about a mile south of Stanley and had been abandoned for several years. […]