the spanish architecture firm el fil verd realized renovation of a single-family home with private courtyard in Barcelona, Spain. the renovation emphasizes respect for the existing architecture and the preservation of the original character of the residence which was built in 1942 and settles in the middle of the two typologies of the early 1900s, as well as modern buildings. the intervention maintains the brick intact structure while redistributing spaces according to customer needs and bioclimatic principles.

from the pavilion, one can observe the facade of the building, the pedestrian paths and the fountain

all images by milena villalba

the main building has terracotta brick load-bearing walls and terracotta brick vaults. before proceeding with the new distribution, el fil verd decided to reinforce the floors as well as part of the foundations. the wooden beams had been badly affected by the moth and were therefore replaced. another critical point to be solved was the presence of humidity by capillarity which affected all the walls of the ground floor and the foundations.

the solutions adopted by the architects were multiple: a physical break at the base of the walls, waterproofing and drainage of the foundation, and a ventilated chamber in the party walls. a ventilated slab was also made to ensure good insulation and ventilation at ground level. in the house, the main rooms have been arranged towards the south facade to maintain a visual connection with the garden and the water source. the roof has been landscaped and transformed into a solarium. the pavilion became a library and an office thanks to its northern orientation and a pre-existing skylight. the existing courtyard has been converted into an “urban forest” bioclimatically interacting with the buildings, which are constructively adapted to achieve maximum energy efficiency. the envelope of the two volumes is fully insulated to maintain a constantly comfortable temperature throughout the year. 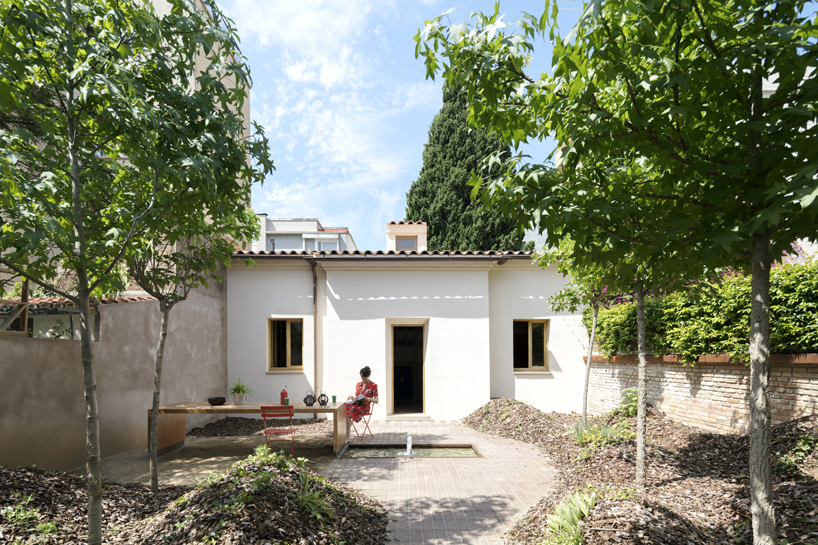 to reach the pavilion at the end of the garden, you have to take the natural organic paths that take shape between the dunes

the materials used are natural, of high quality, breathable and without added toxic substances. this choice meets the aesthetic and health criteria of the project. from an aesthetic point of view, warm tones are preferred because they recall the nature of a forest: exposed cork, terracotta, natural wood, corten steel. meanwhile, thanks to the palette of materiality, the house and the garden function as a symbiotic unit. when it rains, the skin of the house gets wet and darkens like the bark of the trees in the garden.

bespoke furniture with woods such as oak, linden and walnut are superficially treated with natural oils and waxes. the interior modules of the cabinets are made of pine plywood to avoid the use of melanins. the main staircase of the house has been restored and partly rebuilt, re-adapting the original railing. during site works, the environmental impact of waste was minimized, separating it by material and recycling it where possible. cork scraps were cut up and pelletized for reuse as insulating fillers. 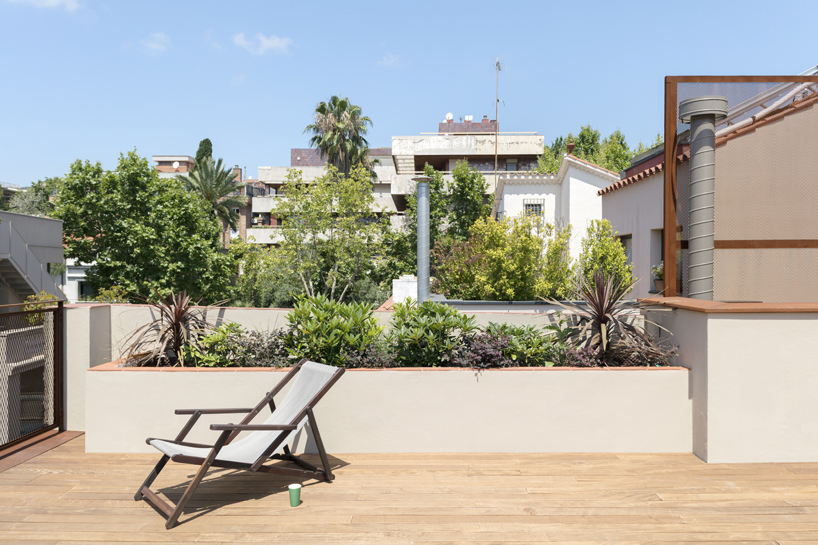 the upper terrace, facing south, is a perfect outdoor space to enjoy in all seasons

the objective of this project was to form a high-performance building with precise control of the interior comfort conditions. to achieve this, passive and active strategies were applied equally. the entire enclosure is insulated with heat-treated cork panels. Meeting heritage protection principles, the insulation is placed as an interior liner, then coated and finished with silicate-based paints to preserve breathability. on the ground floor under the slab, a room with igloos ventilates thanks to the temperature differential between the facades and prevents possible humidity problems. above the igloos, a vapor barrier and 20 cm of thermal insulation cut off any transmission of heat flow between the ground and the house.

to take full advantage of solar radiation, the glazing is modulated by placing the low-emission layer according to the orientation of each façade. moreover, within the “urban forest”, the deciduous trees allow solar radiation to penetrate inside in winter, and in summer they act as a solar filter, shading and protecting the façade and the openings. the fountain in front of the pavilion works together with the garden: here rainwater is collected and oxygenated in a large underground reservoir and then reused for irrigation. in summer the presence of water reduces the temperature and promotes natural ventilation throughout the ground floor. 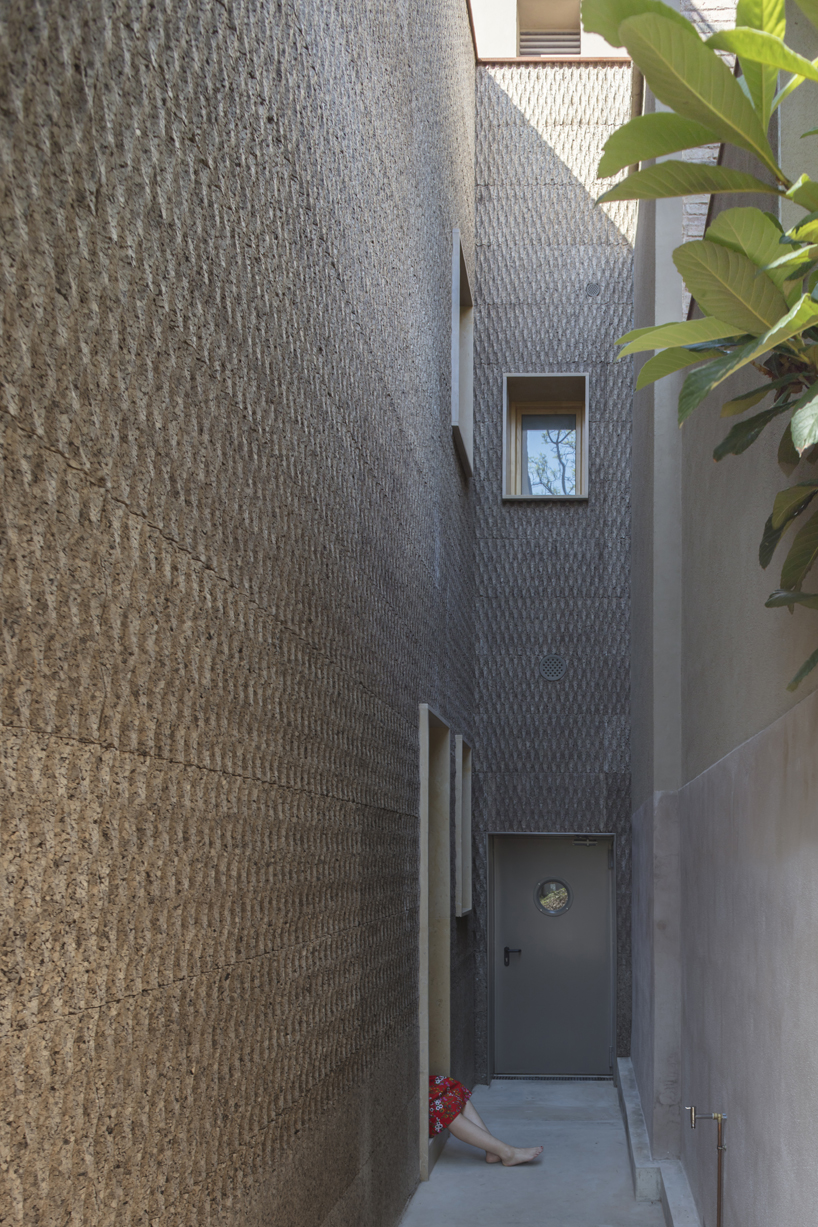 view of the passage and the cork covering on the side facade of the main building. cork texture provides a warm and softened acoustic feel 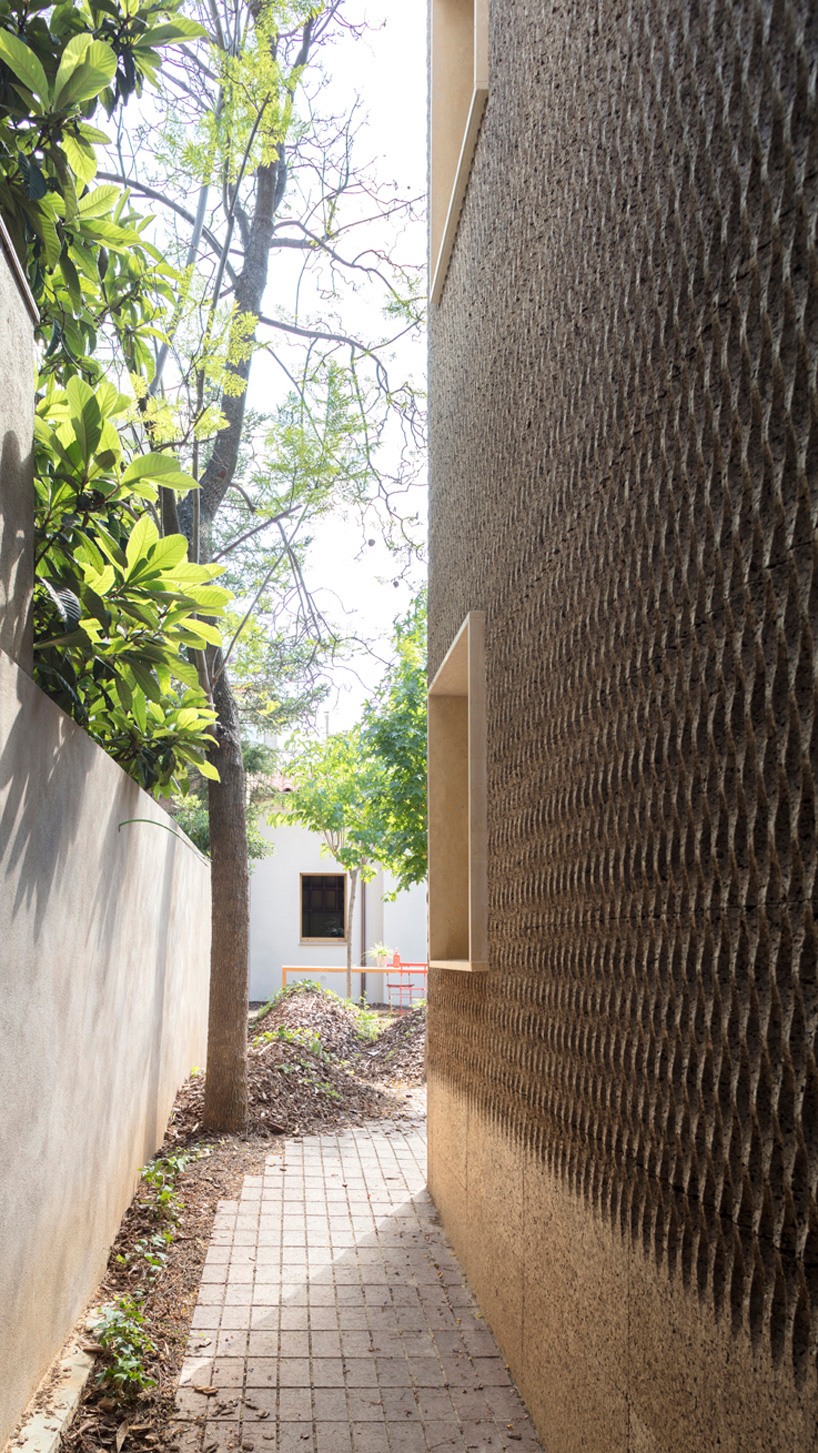 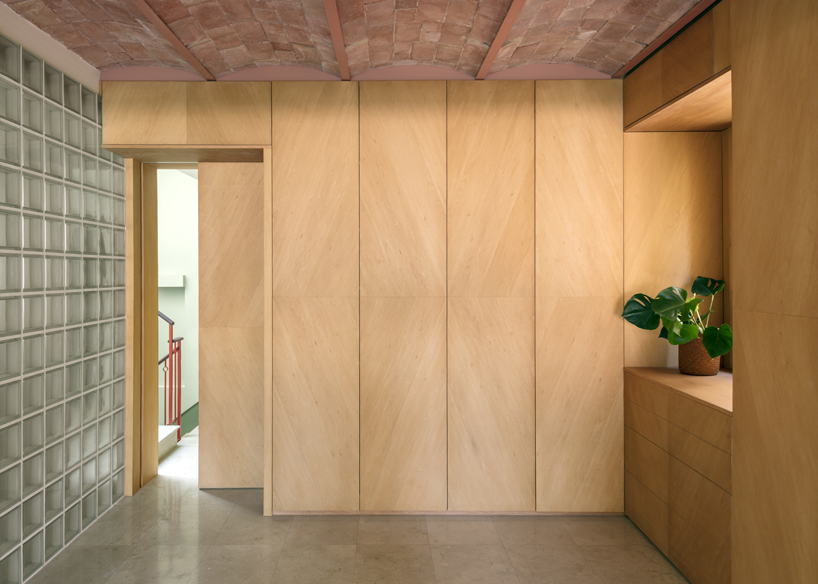 the wardrobes in the master bedroom are part of the architectural frames that modulate the interior; the modules integrate doors, windows and storage spaces using natural materials such as chestnut wood

‘Rusty is a fitting name’: Trump rips ‘weak’ and ‘absolutely terrible’ Arizona House Speaker Rusty Bowers for saying he would never vote for him again Donald Trump took aim at Arizona Republican House Speaker on Truth Social Rusty Bowers is currently running for the state Senate, where he faces a challenger recruited by Trump to […]

Ok, now House of the Dragon is really like Game of Thrones

5 tips for buying a home out of state